T.C.P. International - The Communion of Press

The Communion of Press originally started during the “Age of Industrialization” (1814-1931) in the 19th century as an umbrella pressure group to fight for press freedom in the territories of Viliakmon at the time.
Following the self-liberation of Viliakmon and the end of ‘The War of Total Aggression’ (1931-1944), T.C.P. transformed into a labour union which represented all newspaper produced and released within the borders of Viliakmon.
During the “Age of Troubles” (1944-1996), T.C.P. slowly evolved to include departments for press standards, online outlets, licensing and registry of new media.

In accordance to “The Constituttion of the Associated Clans of Viliakmon” (1996), Article II “The State Government”, section 1., T.C.P. is listed as part of The State Government. This gives T.C.P. monopoly on keeping and updating a registry of media in Viliakmon as well as setting standards for publications. However, T.C.P. itself includes representatives from every registered media in Viliakmon and decisions are made by simple majority voting. The State media(s) do not get special treatment.

Last week, Ministers of both Law Enforcement and Armed Forces were forced into jail by joint action from their supposed subsidiaries: High Commander of the Military Police, Baablyuni and Chief of Staff, Zihehx. They are to be tried by the Military High Court for treason against the nation. Tonight we have two questions for two guests. Both are political analysts and are active in the nation's legislation they are only different by which House they come from.

So, are these events signs of democracy being threatened in Viliakmon, according to you?

Congressman Treisescu: "I believe that we have shown how unready the citizenry is for democracy in the past months, from mutiny within the MSA to a supposed betrayal by both the MAF and the MLE. Even if true, both have been resolved by violent means instead of using a civilian avenue."

Clansman Petko: "We believe that there is a threat to democracy in Viliakmon but we don't believe that they're connected to recent events. Recent events merely show that part of our society refuses to accept the reform we've all been through... In fact, citizens believe that their identification with the term Viliakmon nowadays is mainly a product of reforms we undertook 20 years ago in reforming the old society to what we are today through the use of GCDP."

With the end of the Black Market collapse we've seen a rise in the private market. Do you believe that this will result in a more unequal, materially unequal, society?

Congressman Treisescu: "No, we will merely see now how disproportionate the market already was."

Clansman Petko: "Unless something changes regarding our tax laws, which won't happen, no. On the contrary, the visible capital now will become available for taxing and redistributing wealth."

T.C.P. International Broadcast: Warning about the state of democracy in Viliakmon.

The Communion of Press, composed of 47 representatives of all media outlets in Viliakmon with national coverage, voted 42 in favour 1 against and 4 absentees on temporarily sanctioning the representative of official state media from T.C.P.

We are now free to use this Broadcast as to warn the international community of the state of democracy in the country. Although the GCDP reforms were passed 21 years ago and the V.A.F. has been successfully reformed 9 years ago, it was only recently that the military began inserting itself into duties which were not under its’ jurisdiction.
It was not under V.A.F. jurisdiction to fight breakers of the Omerta rule in organized crime but that of the police force. We are aware that the police force was the one cooperating with criminals at the time but by the time this information was revealed, the institution was purged from corrupted officials already. Yet, it still remains corrupt, with the latest Minister ordering the murder of an investigator officer. Clearly, the inefficiency of law enforcement was the catalyst for the military to step in and take its’ place as the enforcer of law and principles within the country.
However, we warn you that the military is becoming prone to abusing this power. Officers are taking action, both international and domestic, without any consultation with the civilian or non-governmental bodies.
A worrying case is the fact that the population views the military in a positive light and supports the expansion of their duties - such a population will soon support when the duty becomes to trample on institutional rights as well. We warn you that with the MSS and organized crime weakened, the only two institutions still preventing the military from seizing control are the Office of the Head of State (which has clearly shown that it would not oppose such a take-over) and the Bicameral Parliament.

To summarize, if anything were to happen to the Office of the Head of State or to the legislature, there is no existing body left in Viliakmon to defend its’ democracy; Essentially, the state is on the brink of becoming a Military Dictatorship and the citizens are cheering on.

The National Census began on the 5th of July 2022 and was finished & published on the 17th of October 2022, namely due to lack of administrative funds or employees in administration.
It was conducted by joint national NGO’s, T.C.P. as well as International Index Organizations, fact checked threefold before publishing.
During conduction of the census, Viliakmon was split into 22+4 “Districts” and “City Districts” in order to gather both general regional information and then transfer it into National Information. 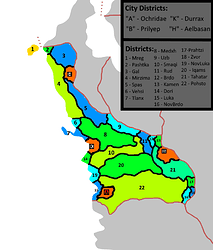 Here we will be covering just the overall National averages, for further information check the Index Database itself.

The Merimang Island pressure group negotiations have announced to be successful. Taking place across the Merimreza Strait, between various private and non-profit organizations within Viliakmon, who see a looming threat which the state Armed Forces present to freedom (as our culture understands it) and democracy (as both us and the international community understand it). The Outlaw Declaration was signed between the invited parties, detailing the goals and methods of countering this threat collectively. The collective representative Speaker will be Emil Tamir, former High Commander of the Military Police and Minister of Security Service. The official name was given to the signatory parties, “Merimang Group” with its’ own sigil. 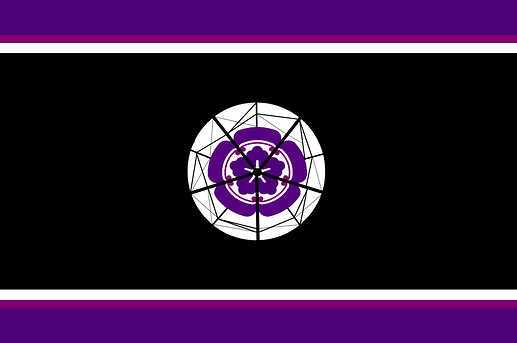 The Speakers’ Broadcast and The Outlaw Declaration

“I am addressing you during the continual troubling times and before a great crisis comes forth. What has happened in Viliakmon in the past few months, culminating in the military drugging the civilian population into apathy isn’t shocking.
The Viliakmoni have always assumed that this phenomena would never happen. This assumption may have been naïve but it is natural. Natural because true freedom has always existed in Viliakmon, natural because the lack of central governance has historically been our issue.
These events do not show that the central government must be dismantled. It shows how fragile Democracy can be, unprepared to defend itself. For this reason the Merimang Group has adopted The Outlaw Declaration. The Outlaw Declaration which empowers the Merimang Group to conduct methods as to achieve goals in preserving or reestablishing stability in Viliakmon.
I understand the suspicion which may arise among the Viliakmoni. I want to reassure you that the Merimang Group will have the situation under control, everything that must be done is being done. This Group is not acting out of fear from the military. It is acting to prevent such a fear from extending beyond our borders – to protect everyones’ freedom.” -Emil Tamir-

"Embarassment for the Regency or has the Black Flag Army been underestimated?"

Battle of the Merimreza Strait:

Details regarding “The Battle of The Merimreza Strait” (30-10-22|02-11-22) are now available and reliable.
Analysts have regarded the battle as “possibly revolutionary” in the field of “military tactics”, in regards to the tasks carried out by the forces of PMC EXilitary, particularly the “Spider Nest Formation” of the aircraft.

The Battle of The Merimreza Strait occurred between the 30th of October (03:10) when Merimang Group patrol ship spotted BFA’s forces and lasted until the 2nd of November (21:15) when BFA successfully landed on Mainland Viliakmon with their remaining Amphibious Assault Transport Carrier.


No more updates for now.

10:30 Merimang Group has declared an Exclusive Economic Zone of 212nM around the Merimang Island.

11:45 PMC EXilitary has issued a blockade of the Merimreza Strait, laying subwater mines along its crossing. This essentially cuts Mainland Viliakmon from 60% of its trade, as the canal system 1 and 2 lead to the same passage where freight ships cross the Merimreza Strait.

12:45 Regent-Representative Idryoi has criticized both the blockade and the purchase, warning that “With the loss of control over northern Viliakmon and Merimanng Island waters, we are already running a deficit.”

15:00 V.A.F. Infantry Divisions on the Line of Effective Control have been reinforced by the V.A.F. Airforce, Wing Group XXIV consisting of 10 Scout-Recon Helicopters, 20 MRA for close combat and 20 Multi-Purpose high altitude aircraft.

15:50 V.A.F. Scout-Recon Helicopter “Owl” has reportedly been shot down by BFA forces.

17:00 Local Emergency Alarm System has been activated in Aelbasan.

17:00 V.A.F. Airforce has launched a high-altitude cluster bombing of the Aelbasan industrial zone, targeting an old warehouse where it was believed Skandergrof HQ was.