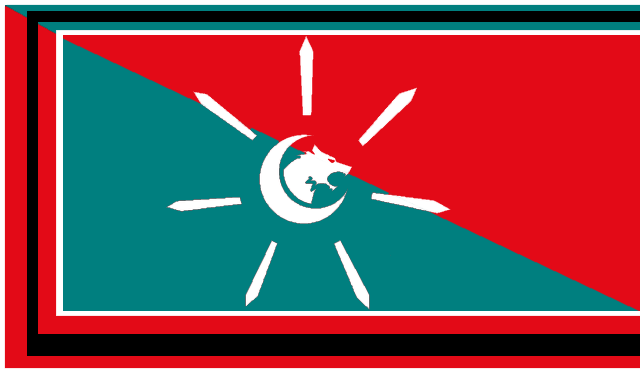 “Registry of Inetez (International Ver.)” is a project of an executive agency callled “The Open Inetez Council” (OIC). It is merely an International version (in Austral), of the already existing Registry of Inetez used by the residents and citizens of Inetez.
Its purpose is the same as the domestic Registry; To provide 1) Easy access to important information related to Inetez, 2) A implified approach for contacting and interacting with The Executive Government of Inetez. It is maintained and regularly updated by the previously mentioned OIC.

Historically, Inetez has always been an influential country. 19th of May 1947. and subsequent adoption of the “Law of The State”, Inetez was an extremely miitaristic country. After going through a period of extensive and thorough reformation after 1947., Inetez changed their foreign policy to be dependent on ‘diplomatic’, ‘socio-economic’, ‘cultural-scientific’ and ‘non-interventionist’ approaches towards the international community.

Contemporary Inetez is an enormous, modernized, Pacifican state which has also kept its unique identity (such as, high religiosity). It addresses every other state in a cordial manner - As such it maintains the 3rd largest diplomatic corpus. However, in practice, Inetez does show favoratism towards (“Small Neutral Nations”-SNNs), mainly by pursuing closer diplomatic relations with them, providing foreign aid and conducting special agreements on mutual assistance & development. This favoritism is likely a remnance of its’ Iron Century foreign policy.
In an attempt to overcome Great Power framework structure, it is a strong advocate of the World Forum, globalization and integration. Due to its’ capability to create a disproportionate unipolarity but refusing to; it’s sometimes critically called “The Sleeping Giant” or positively (mostly by SSN’s) “The Silent Superpower”.

“Inetezi News International Department” is a private news agency which specializes in delivering concise, objective information updates of either internal or external policies, to the international community.

Inetez strives towards minimalizing internal government interference in trade between it’s private/NGO institutions with the International Community. ATARWI primarily exists to request humanitarian/urgent assistance from the Inetezi government. However, it can also be used as a medium of contacting the Inetezi executive government for providing shipping and trading with its private companies.

ANUAL (1) is refered to here, where it is used to communicate specific intergovernmental cooperation in the fields of University Education, Space Exploration, Research Facilities, Infrastructural projects, Environmental agreements, Religious-Cultural treaties. The “Law of The State” provides and guarantees legal autonomy of Inetezi institutions within these fields.

ANUAL (2), a standardized form for applying to the Foreign Scholarship Program and similar is a different application, intended to be used by foreign students or private entities. ANUAL (2) is provided on official site of the OIC.

EMA announces the completion of nuclear disarmament in Inetez

The Energy-Medical-Association, an executive body in Inetez responsible for, among all else, the overseeing, servicing and reporting on phenomena related to Energetic and Health, has announced that "Nuclear Disarmament of Inetez is complete".

According to EMA reports, out of the 743 nuclear power reactors in the world, 228 of them are in Inetez. When cross-checking the reports with The CCI from 1950-1988, which initially lead the nuclear weapon proliferation program, the latter number of 228 reactors is accurate. "Team Delta-9-Hydroxy" from the (now defunct) "MIL-NUC-SEC" department of CCI spearheaded the domestic research in the 1940s and subsequent production since 1950.

"Although warheads have been disposed of for quite some time, the electrolysis reprocessing method of reactors significantly slowed down the process of complete disarmament." said the Chairman of EMA, Yanha Reventri, continuing "Completely shutting them down was against the executive directive, the task given was to convert them either into usable energy reactors or similar. Thermal disposal was explicitly banned as well." 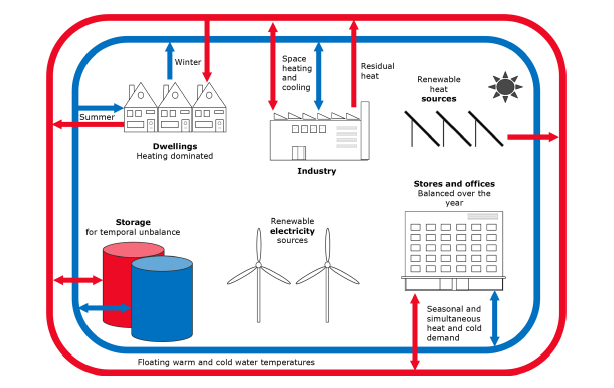 Out of the 228 nuclear power reactors in Inetez, 149 now serve more as facilities to construct MRI & X-RAY equipment and the needed materials. 53 are in the process of offering district heating within major cities or at least the central sections of major cities. From the remaining 26, 10 are used for power generation, while 16 are still kept by EMA for reprocessing future waste.

"Non-interventionism does not limit proactivity", says the Diyan Vezier

"Inetezi News-International Department" is one of many public-private joint investment companies within Inetez. What separates INIT from others is that it is accountable only to the general public. We've conducted an interview with incumbent Diyan Vezier, Vihan Polati, regarding his plans for the second portion of his term in office.


INIT: "You have recently appointed the Grand Porta of External Affairs as your 'Deputy' let's call it. Is this a sign of what you plan to do in 2023 and 2024?"

DV Polati: "Partially. The choice was made both because what I intend to conduct, personally, involves the need for better communication with GP of EF and the diplomatic corpus. However, there is also the more personal-professional factor where I believe that they'll be able to accomplish these tasks."

INIT: "What do you plan to conduct and which tasks are needed to be accomplished efficiently, precisely?"

DV Polati: "It's in my perspective to lead a more proactive foreign policy, namely through visiting other nations, those which our embassies recommend us to."

INIT: "Some would call this an abandonment of non-interventionism which Inetez has religiously followed since establishing the Directorate regime."

DV Polati: "That's a very speculative position. Our response towards Humania shows that we intend to keep a generally neutral portfolio on the international domain. People might be mistaking what non-interventionism entails. Non-interventionism does not limit proactivity, it doesn't mean remaining passive and expecting everything to be accomplished through domestic policy."

INIT: "I see... You say that you will be conducting these on recommendation of the state's embassies in each country? Which countries are on mind for now?"

DV Polati: "It's just recently been issued to the diplomatic corpus. This is a long-term plan, so the list is not exhaustive. It's flexible."

INIT: "Could you be more precise on what you have received as of now then?"

INIT: "Interesting. So what do you plan to achieve from these diplomatic visits? I am also noticing a pattern; the listed countries include relatively 'small' nations who are not yet in major alliances with one exception. I want to ask, is your intention to revert back to the "The Guardianship" foreign policy Inetez approached with during the Cold War?"

DV Polati: "Nothing particularly. Every nation is different. We will see. I will assess the situation and see if we could accomplish something more than cordial relations. I don't see how this is controversial.... However, I must completely rebute the claim that this is a return to the old foreign policy. As I've said, this isn't an exhaustive list. It's open and the recommendation list is still incomplete."

INIT: "One statement in that, where you don't believe that this procedure is controversial. Do you plan to do something other that is related to diplomatic activity that would be considered 'controversial'?"

DV Polati: "...I, believe, that we should consider...A reconciliation approach..."

INIT: "ALRIGHT! That's all for INIT.......I understood what you alluded to near the end."

Local election results from the Vahlayet of Abri, for Abriprak (urban) and the Vahleyet's Tukums (rural) were held, changing the structure of the Divan Porta (Legislature).


VOC (far-left "Dengists") elected to represent the city of Abriprak. In the current Polati Executive, VOC is considered a "soft opposition" party, supporting Polati's efforts to lower the housing bubble and (comparatively high) Gini inequality but criticizing the continual cooperationn with private corporations.
IN (center-left) 10 out of 116 seats in the federal Legislature (Divan Porte). IN is considered pro-Polati, having a broader platform than VOC, which supports internationalization policies.
The Green-Green Coalition (Environmentalists and the "Islamist" parties) win 8 out of 116 seats. They represent "an umbrella opposition party". This is a big victory for them, as their main opponents, the POTNI (far-right National-Imperialists which glamorize the Republican era), though also "an umbrella opposition party", fail to win in a single Tukum.
Triada, the economic-right party and main opposition to the VOC, win more seats than the VOC, though only in areas which are historically considered wealthy.

Abru local elections show a move towards economically-centered questions. The strange GGC confirms the grip of the Ulema and their continual positive reputation, even among the most socially liberal groups. 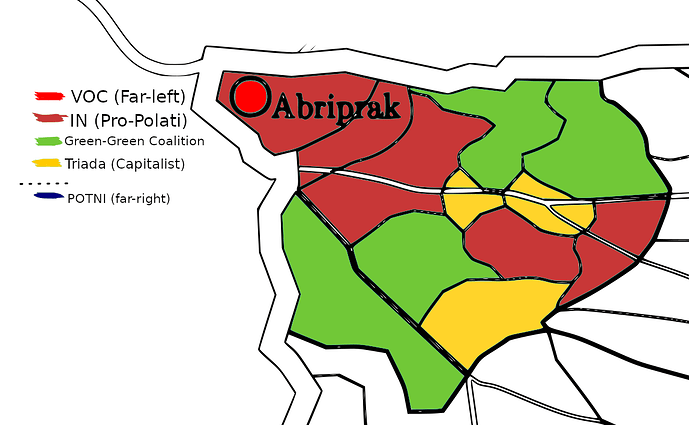 Analyzing the global market trends of the previous G20 economies, the Central Bank of Inetez plans to steeply increase its interest rates as to lower general market liquidity. The Board of Management cited “Freezing certain assets isn’t out of the scope of considered actions, either.” 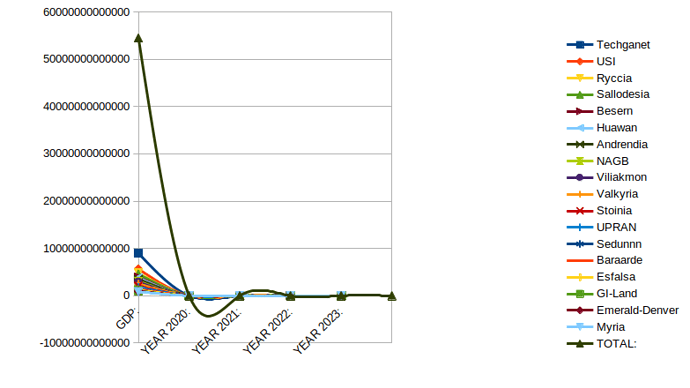 A global crash is predicted to occur in 2023. However, the Open Stock Market responds by retunneling its investment fund to new, rising economies, mainly in NC, Bareland and Bailtem. 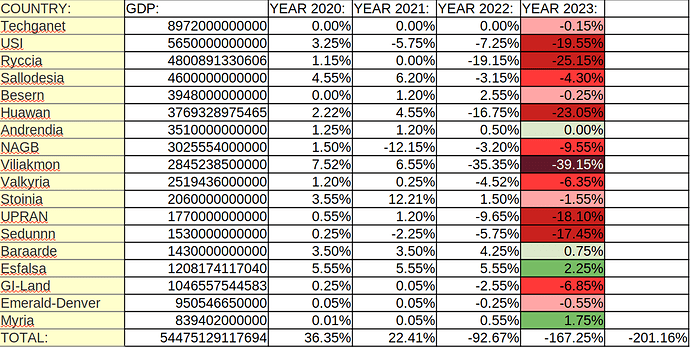 Reasons for the crash are cited as being “Numerous when looked at individually. Generally, all are results of devastating wars and sanctions, which effect trade partners and supply chains.”

Despite internal and external pressures, federal government tax rates and expenditure plans will stay the same


The Grand Porta of Finance, professor S. Dorvanii, has made an official statement on the Federal Treasury plan, "Elections in the Vahlahyet of Abri show that the voters are concerned with specific allocations of the federal expenditure; Namely concerned with the housing crisis. I do not promise a resolution of the housing prices, though allocating more resources, within the existing Federal Expenditure Plan, will be considered."


On the topic of an "impending global crash" underlined by the Central Bank and the Inetezi Stock Exchange, Dorvanii stated that "The free and open market will continue to function independently of government interferences. Whether or not the forecasts are true is irrelevant, there will be no changes to the Federal Treasury plan, as a result of speculations from the free and open market."
It remains unknown what specific policies the Central Bank and the Stock Exchange plan to implement, though they've stated that specifics will be announced appropriately ahead of time, around January. 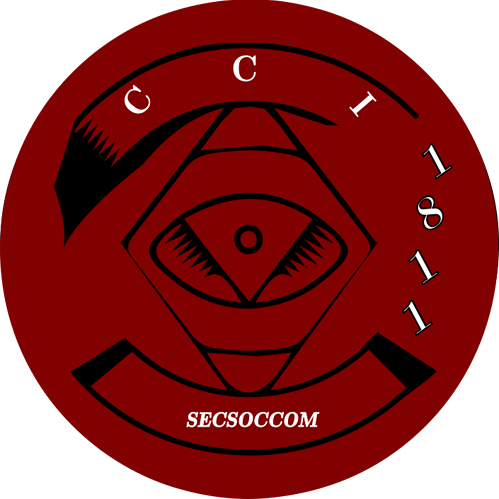 SwissSwordProtocol
: CCI-coined term for investigation and documentation of malicious attacks carried out by the Black Flag Army insurgents. [1]

SUP3RHVM4N
: New CCI term for the final red-flag malware (…), which presents itself to the device and user as a false ransomware encryption. [4]

For LMM, a simple re-imaging and re-mounting of the physical drives is sufficient. With the physical disks corrrupted, the data cannot be retrieved in any way. More information regarding LMM is available in the footnotes.

For SCCASCADE, given the known side-channel security hazard, modern network infrastructure (SQL, HTTPS, WIFI, Cloud & Virtualization Encryption), for now, the fix posted on the “Stream” social media platform, is all that we can provide.

As SUP3RHVM4N is a red herring attack, a distraction from the initial two, no additional fixes are needed.

===WE ARE IN THE PROCESS OF CREATING A PERMANENT CLOSS-PLATFORM SOLUTION. ALL MALWARE IS WRITTEN IN AND RELIES ON THE USAGE OF BASH, CREATING AND SPREADING A REPLACEMENT FOR BASH WILL TAKE A LONG TIME===


[1] SSP has closely monitored cyber infrastructure in Viliakmon, noticing potential malicious content appearing as far as June 2022
[2] LMM derives from a~licensed~protocol with a digital cetificate issued under a company which ceased to exist around August 2022
[3] SCCASCADE utilized cache, time, power-monitoring attacks, which are subsequently followed by cryptanalysis and poweranalysis, finalizing the grid electronic system through utilizing allowlist as to generate an electromagnetic attack.
[4] SUP3RHVM4N is a red herring ransomware, masking these attacks as simply lucrative.

That is all for now. Until the permanent solution is engineered, we advise all users and infrastructure management to temporarily lock their data behind the self-initiated loop. This does cause all devices to perform at low capacity. This advise remains to be active even in the event that hardware manufacturers provide TEMPORARY solutions in designing new chipsets and CPUs.