Chancellor Müller looks out of his plane’s window, the clear blue sky over Cordilia. It’s weird how the sky is so calm, yet things have not been peaceful so to speak. New conflicts are brewing in several places. At least, one of these new conflicts had just ended, the Thalapadian Civil War.

Fought on ethnic and historical grounds, the Thalapadian Civil War was bloody and vicious. The Kingdom of Neufolk and the Congressional Republic fought like cats and dogs throughout the conflict.

that ethnic and historical ground reminds me of the Elbonian conflict, Müller thought. He wasn’t even born yet when the conflict erupted, and was only one year old when it ended.

He reviews his notes one more time. Thalapadis was a member of the LoC, so he was keen on helping to get the Thalapadian economy back on track.

His plane will be landing in the Thalapadian capital of Asimopoli soon.

Gott mit Uns, he says to himself

Antonides waits impatiently at Asimipoli international airport for Müller’s arrival. This is the first diplomatic visit since the civil war, and it’s by a LoC member at that.

Weissertein is probably one of the most important states thalapadis wants to establish strong ties with. It is both economically and militarily strong and has shown considerable international influence. Truely a ally worth having.

He is also hoping on political support in the Humania situation. No one is afraid of them as much as Thalapadis. A nuclear armed state actively braking international law at anyone’s border is terafying, but even more so at yours. For now the strait is protecting them, but with the integration of allied city states planned to happen in late January that will change. Suddenly he will have a land border with Humania.

“Thálassa voithá tous gious tis” he says, seeing the plane approach and land. He walks onto the runway to meet Müller in person for the first time.

The plane lands as Müller finishes his final prayers. His advisors noted that nearby Humania had been causing quite a stir in northern Cordilia. He decided to not think about it too much, but made sure to keep himself well informed in the ongoing situation.

He steps down from the airstair to be greeted by President Antonides, quite the fellow Müller said to himself, to lead such a small-yet-powerful nation is no small feet, so I have to give him much credit he continues.

Chancellor Müller extends his hand towards the President, gesturing for a handshake,

“Good morning, President Antonides, a pleasure to finally meet you in person.”

“Good morning chancellor, been waiting for this moment impatiently for a long time.”

He gives him a strong hadshake while smiling

“Welcome to Thalapadis. What are your first impressions?”

“Well, for one, it is definitely not like what is shown in the news.” he states, “although, to be fair most of the news shows the warzone that is Rykapadis. Either that or your speeches.” he added.

“So far, it had been simply extraordinary I must say. Reminds me of the island of Lileanen back home in Weisserstein. And I’ve heard a lot with regards to your nation’s culture and history. Say, how are things going with the civil war ending?” Müller asks President Antonides.

Antonides was speaking in a soft, friendly voice

"The stabilization is still in progress, the military garrison is really necessary. I wanted to go and visit Thermopetri for quite some time now but the military and the congress still forbid me, saying that it’s still too dangerous. Most of the island is also being investigated as we still search for anwsers on how weapons got it, and Van Mathis got out. I’ll asume you’ve heard of those officers being arrested and the grand admiral suspended from duty temporarily?

“I’ve heard, at least snippets of it. Something to do with corruption and collaboration with Neufolk forces by members of the Thalapadian military if I recall correctly?” Müller asks.

To betray your nation and collaborate with the enemy, when you are trusted to defend your nation against said enemies, is nothing but vile, Müller thought to himself.

“Quite a saddening thing to see when your own armed forces betray you for the enemy. If it was a Weissersteiner soldier during our civil war, they would’ve been shot on sight. Those might be one of the darkest moment in Weisserstein’s history”

Müller quickly changed the topic of the conversation, “I’m glad to hear reconstruction is going well, you could definitely expect Weissersteiner aid in the reconstruction department. Especially in getting the Thalapadian economy back on track.” he added further.

“Thank you, having allies you can trust is always beautiful. The economy will make it’s recovery soon enough, thankfully Rykinisi is not as strong economically as the other islands as it’s more rural. But it’s kind of the breadbasket of Thalapadis, most of our farms are there. We do important most of our food but Rykinisi makes food overall cheeper in the nation. A spike in food price was for a lot of people the first real effect of the war they could feel. Anyways, i think that we should start going, we can’t stay here on a runway forever. I’ll assume you’re tired from the long flight, so do you want to rest first?”

“Well, I’m not that tired, but I do appreciate the gesture. Besides, I have an entire archipelago to look forward to.” Müller answers.

“I look forward into what you have in store.” the Chancellor continues. “Speaking of which, may I know where we’ll be going?”

“You most certainly may. The plan is, if you have no objections, to start the visit with some culture, to first go to the old city, the reminants of the old city state of Asimipoli, and listen to a tragedy in the amphitheater. After that we’ll have lunch and then we’re going to visit Asimipoli subnautics to show you the newest developments in submarine technology your allies have made”

“Interesting choices for the visit. I look forward to seeing all of that,” Müller responded.

He looks at his watch, 09:40 AM. 12 minutes was spent discussing their plans in the airport.

“Well, then. I believe we should get going. I look forward into learning more about your nation’s culture,” the Chancellor says to president Antonides.

The two high ranking politicians are lead to the presidential car and taken to the ancient part of the city. 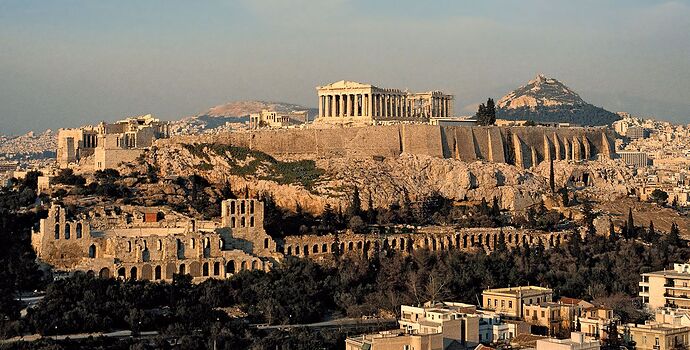 It is like entering a history lesson. Ancient buildings all around, each with their own story. Antonides points trough the window

“See that big temple? It was dedicated to the god of the sea and of war. That will be our first stop here.”

The Chancellor is mesmerized by the scene of the ancient city. It looked as if it had come from a fantasy tale. Such is the wonder of ancient Aegean architecture.

“Its quite astonishing, I must say. I look forward to what you have in store next.”

Müller looks out, seeing the beauty of ancient architecture. “If I may ask, Mr. Antonides, how old is the temple itself? I’d assume its more than 2000 years old.” Müller asks, curious regarding the city and its history.

“about 2300 years is what our archeologists estimate. A true wonder of architecture, it’s the biggest temple on the islands and neighboring regions. As i said it was dedicated to the gods of war and sea, so i think you can assume what ancient asimipolitan culture was like. When the Ryccian warlord came to attack Asimipoli lead the defense, forming the first grand coalition of city states. 3 times the first warlord tried to conquer the islands, 3 times we repealed them. Only when his son utilized unconventional war tactics did the islands fall.”

“I see that our nations have quite a similar history. Weisserstein, or perhaps more precisely the many kingdoms, duchies, principalities, bishopric, margraviates, and other small states were also subjected by many foreign power. Three of the most influential I must say are the Gianlucians, the Triangular Empire, and the Elbonian Empire.” the Chancellor stated.

“The Ryccian warlords must’ve had their fair share of blunders during their attempts at capturing Asimopoli. So it is quite an impressive feat, considering the difference in size and power I’d presume.”

“most likely, sources imply that he had no naval experience, meanwhile we had Agreas “Anikitos” on our side. Agreas is most likely the most famous thalapadian admiral in history. If we are to trust the great epic of Asimipoli, one of the only sources remaining on that ancient war, he was unmatched when placed in command of a fleet. Of course, that’s most likely exaggeration, but what we know is that after his death he became deified, with people praying to him to return and once again defeat the Ryccians, giving him the epithet anikitos, undefeatable. He became probably the most major diety in the ancient thalapadian religion, but with time Christianity replaced it. It only survived on the island of Vorinisi, which is currently not a part of the congressional republic, but is in the process of joining together with the city-states in Padipeirou.”

“Very interesting. I do hope the unification with those two city-states goes along well.” The Chancellor stated “The rich history of Thalapadis has already gotten me hooked, Mr. President, please do tell me more.” He added further.

Müller himself was a history enthusiast, becoming a massive fan of history in his teens. As with many Weissersteiners, his interest usually lies with Weisserstein during the War of Unification, the Weissersteiner Civil War, the Elbonian Wars, and the infamous War of Utter Tomfoolery. The rich history of Thalapadis has gotten the Chancellor’s attention as the two leaders continue to stroll around the ancient city.

“I will do as you wish” said Antonides smiling. As they continue walking around the ancient city. Antonides stops and points at a perticular ruin 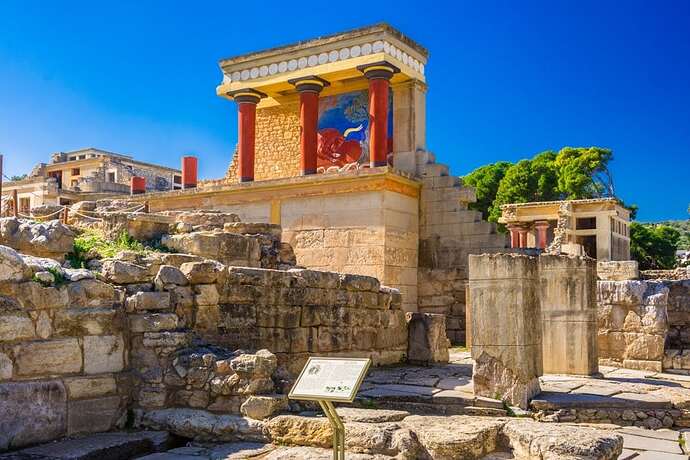 “See those large ruins over there? That building was originally constructed to serve as the residence of the king of Asimipoli, but when the king lost his power it became the meeting place of the assembly that replaced him. The assembly was kind of half democratic: at the core ware the elders who ware selected by the rest of the council. Usually that ware old politicians or generals. Then you had the aristocracy, members of prestigious families who had a lot of influence in the city. Then you had the commons, representatives of the normal people. Tho representing a majority of people they had less than half of the seats, but they had one great power. If two thirds of them agreed on it they could veto a proposal. Later that was replaced by 2 special representatives who would be elected by a two thirds majority. Was more efficient. After the ryccian conquest the council was officially disbanded, but continued to meet in seacret for centuries, keeping the democratic tradition alive.”

“The ruins must be at least two thousand years old, I’d presume? To have such a long tradition of democracy is inspiring, and to be able to see that thousand year tradition with my own two eyes is amazing in its own way.” Müller stated.

“I’m glad to be able to see these great relics of Thalapadian culture and history, however, I believe you still have much more in store?”

“Indeed we have. Come, we have one more important stop in these ruins before we move on. If you want we can take you to other ruins some time in the future.”

Said Antonides. After 15 minutes of walking they arrived. A amphitheatre, as old as the rest of the ruins 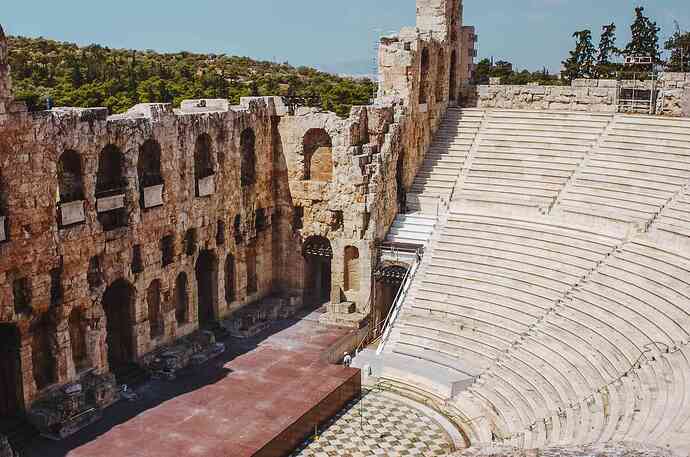 “Welcome to the Asimipoli amphitheatre. We are here for a show. A theatrical group focused on preserving ancient Thalapadian culture got permission from the government about 3 years ago to perform ancient tragedies here. Usually these are free and public, but today it’s reserved just for us”