Legislators of the South Pacific,

There has been a seconded motion to bring an amendment to the Charter of the South Pacific to remove formal Local Council representation in the Assembly. The debate thread can be found here.

Please vote by poll if possible. If you cannot vote by poll, post ‘Aye’, ‘Nay’ or ‘Abstain’ in this thread. Please do not vote both by poll and by post. Comments and discussions belong in the debate thread and should be posted there.

The text of the bill is as follows:

CHARTER OF THE COALITION OF THE SOUTH PACIFIC

Should this amendment be passed? 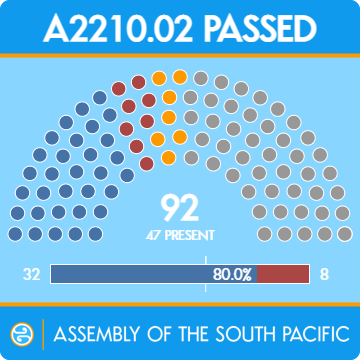 This amendment required a 60% super-majority of votes in favour, excluding abstentions, to pass. The results are tabled as follows:

In light of these results, the proposal passes, having reached the required super-majority.

The Office of the Chair has decided not to hold a game-side referendum on [2245.AB] Local Council Representative, as it does not directly affect the game-side community nor its home governance; the amendment simply removes a de facto useless provision of the Charter. Neither the community nor Council would be truly affected by this amendment, except maybe the non-existent representative.

Vote has passed , this thread no longer needs to be open.