HELLO!! Does this thing work?

"Do you want to know why I abandoned my post as Commander of the V.A.F. on this mission? Go on, tell them." -Commander Skandergrof

"We saw some troops pass, it hasn't been a month, the Junta troops, passed, I saw them. Something about a war...I don't know. Days later, air strikes. Every six hours, with each of bombing moving by just a few hours back or ahead to unnerve me even more...Darkness, then chemical attacks we experienced because of bad Junta orientation..." -Former Icelast resident, civilian.

"Evacuation, ordering an evacuation. I was so happy hearing that! Finally, time to saw battle and then it came. Your group retreated into the city, now nearly abandoned. Taught us how to make mines, dig trenches, even make some weird bombs against the acid. They helped, made the sarin feel like tear gas HAHAHA--" -Former Mountainton resident, civilian.

"Some stories untold! Many are untold. We'll be updating you on our activities here, since it seems a BIG SURPRISE awaits us when we get back home or when some of us get to our new home."-Commander Skandergrof

Skandergrof walks into the Radio Station to "give commands" of what should be broadcasted. In it there is the operator, former V.A.F. A.F. Pilot Carlosiecny...It sounds Ezervulgian but it's not.
"Hey Skander did you know that New America has some pretty nice FM radio? Listen to this"-Pilot Carlos.
"Yeah...Yeah that's pretty nostalgic. Wait wait wait"

-"The plan is to walk through the mountain ranges. You said and this was you Carl that there was still a supplied V.A.F.-looking airstrip set up north of Tento when your helicopter came for escort."
-"So you want like 20 000 people hiking through the mountain trails like it's the 1930s while there are about 9 different armies around us and we are on low supply?
-"Yes because the only other two ways is to push north which I'm not commanding or to go through Sugovia and we're not going through Sugovia nor Weisserstein because we look like pirates. Broadcast this."
-"Exactly, we look like pirates. What if the UPRAN forces already took the Tento infrastructure Group 2 set up? Besides, why would UPRAN border patrol who is on high alert allow V.A.F. mutineers to use it? I suggest we contact the Vehsi."
-"Pilot Carlos...How is a white collar mob clan, stationed in Ikaranara, not in the Past, going to help us retreat? Like you said, why would they help- Oh." 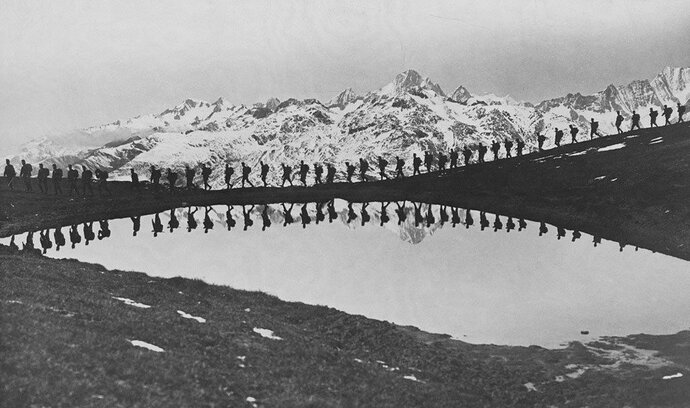