A leading Kliegmean manufacturer of automatic and sniper combat firearms, guided artillery munitions, and a wide range of high-accuracy weapons.

IRMASH is the flagship of the Kliegmean weapon industry, producing about 95% of all small arms in the country. IRMASH Group companies produce not only small arms, but also specialized military and civilian transport and equipment, such as unmanned aerial vehicles, high-speed transport and assault boats for special operations forces, high-precision missile weapons. IRMASH Group exports its products to more than 14 countries around the world.

(IC: this will be the Weapons lore dumpster for Kliegme) 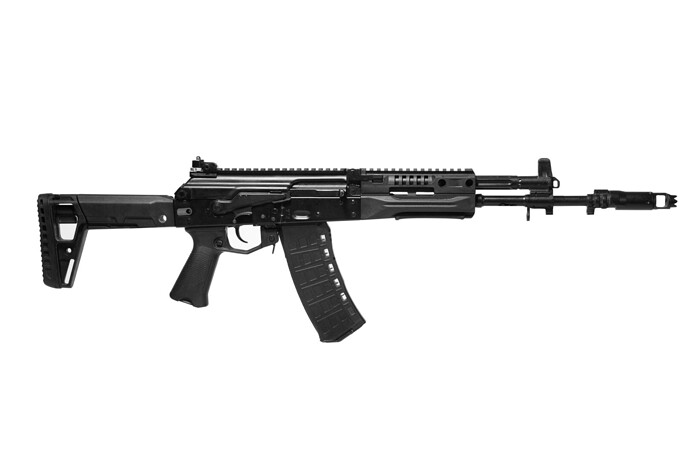 
The 5.45 mm KP-12 is the standard service assault rifle of the Kliegmean infantry and other units.

This model is the pinnacle of KP system development, different from the previous generations by its elaborate ergonomics, all-day usability and increased accuracy and precision.

The KP-12 project began in 2012 by the LOZ Factory, owned by IRMASH, in an attempt to participate in the "BV” project which were held by the Kliegmean army. Throughout its development and evaluation stage it has received multiple modifications to meet the Kliegmean military’s standards, resulting in an affordable and reliable Service Rifle.

The KP-12 uses a 30 round magazine with 2 firing modes, full auto and 3 round burst, with 700 rounds per minute in Full Auto Mode. It also hosts integrated picatinny rails to attatch various optical sights, grenade launchers, lasers, and other add-ons.

It is also as improved in terms of user reliability, equipped with a far more rigid top cover interface, ergonomic design, and a new free-floating barrel.

The 5.45mm RKP-12 is the standard Squad Automatic Weapon of the Kliegmean infantry and other units.

This model is the newest of the RKP Fmaily, different from the previous generation by its reliability, and adoption of new designs.

The RKP-12 is chambered in 5.45×39mm which features the traditional gas-operated long-stroke piston system, and shares several novel technical and ergonomic features derived from the KP-12 program. Such as a Picatinny rail on the top of the receiver for mounting various optical sights and on the bottom of the handguard to mount the Picatinny rail mounted detachable bipod instead of the fixed bipod of the RKP-76, an ergonomic pistol grip and a folding buttstock.

While it mainly uses a 95-round Drum Magazine, which allows it to have 700RPM, it can also use 30-round box magazines from the KP Family. 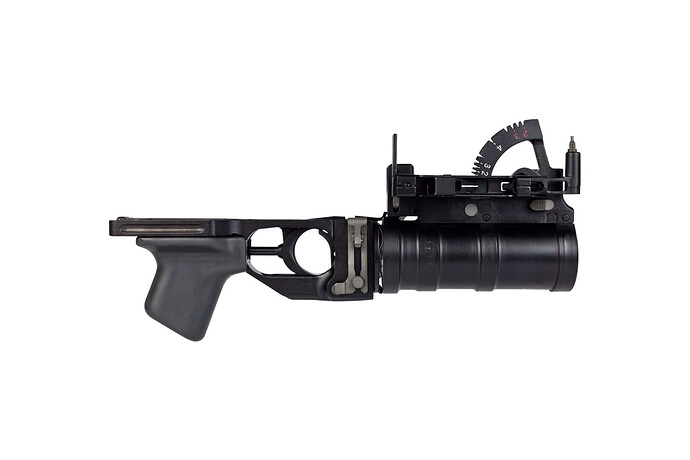 The GP-40 40 mm underbarrel grenade launcher was designed to improve the combat capabilities of individual servicemen and units of the Kliegmean Armed Forces, as well as special operations law enforcement units.

The grenade launcher makes it possible to engage enemy personnel and unarmored vehicles with fragmentation and thermobaric grenades at ranges of up to 400 meters.

Non-lethal, illuminating and signaling grenades also can be used.

Traditionally for its class, the GP-40 underbarrel grenade launcher is muzzle-loaded, which assures a high rate of fire and easy loading and unloading. 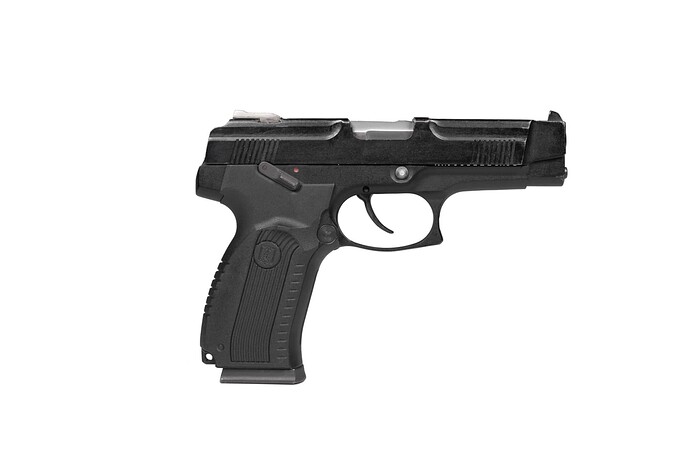 The MP-448 pistol was adopted by the Kliegmean Armed Forces as a sidearm for officers, replacing the M19 pistol.

Its design allows using the full range of 9x19 mm combat, sporting and other rounds, including the 7N21 high-power armor-piercing cartridge being the primary choice for the MP-448.

The advantage of the Yaragin pistol is its reliable automatic action. Capable of firing its 18-round box magazine at a steady 45 rounds per minute. 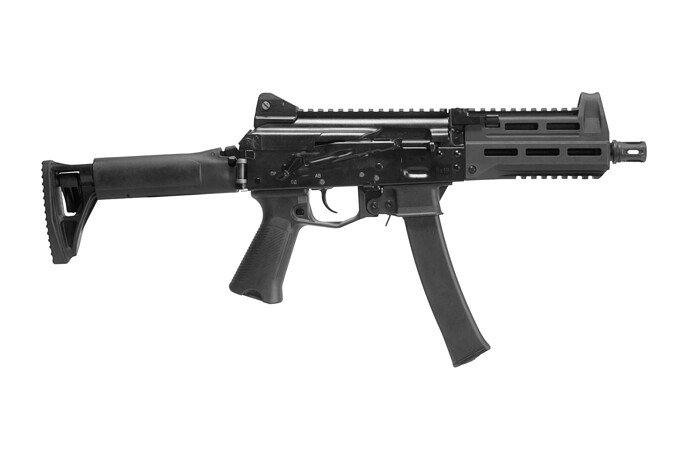 The 9 mm PPK-18 submachine gun is designed to increase the efficiency of the Special Forces of Kliegme as well as special operations law enforcement units.

The main cartridge for this submachine gun is the 7N21 high-power armor-piercing round, but the PPK-18 can also use all types of 9x19 rounds.

The use of a pistol round allowed use a simple and reliable blowback action. It uses a 30-round box magazine with a Fire rate of 800 RPM.

Scopes can be mounted on a Picatinny rail on the dust cover, and other accessories can be attached on the Picatinny rails on the top and bottom of the handguard, as well as the M-LOK interface on the sides. 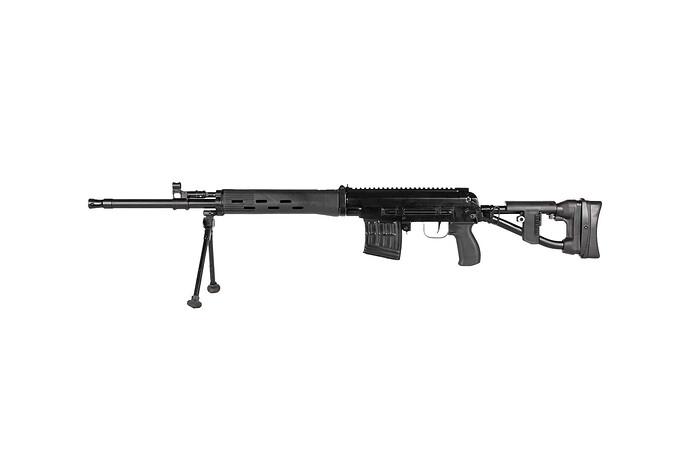 The 7.62 mm SVK-M is a modernized version of the combat-proven SVK with improved performance.

The SVK-M is designed to engage enemy personnel and other unarmored targets at ranges up to 800 m.

It features reliable gas-operated action with a short-stroke piston and gas regulator.

It is different from the SVK in having all wooden parts replaced with plastic ones, a folding skeletonized buttstock with an adjustable heel and a removable cheek riser to make using scopes easier, and an ergonomic pistol grip that is no more an integral part of the buttstock.

Any type of 7,62x54R rounds can be used for firing the SVK-M, but the best accuracy is achieved with special sniper cartridges.

Scopes or night-vision sights can be mounted on a Picatinny rail on the dust cover.

The rifle has backup iron sights and a bayonet mount.

The RPG-40 is a reusable shoulder-launched unguided Anti-Tank Rocket system, made with a doctrine of multi-purpose, it can fire many different rockets, capable of firing both 72mm and 105mm rockets.

The RPG-40 fires a powerful 105 mm PG-40V rocket, which has a tandem HEAT warhead. A precursor charge is used to defeat Explosive Reactive Armor (ERA). This rocket penetrates 650 mm of rolled homogenous armor behind ERA, or at least 750 mm without ERA. This anti-tank rocket is capable of disabling the latest and most protected Main Battle Tanks.

There is also a TBG-40V rocket with thermobaric warhead. It is a specialized munition for use against buildings, field fortifications, entrenched infantry, soft skinned and lightly armored vehicles.

Different rockets can be used to engage different targets, so the RPG-40 is a rather versatile weapon. Both 105 mm and 72 mm rockets have similar ballistics. This feature allows to use the same sights for different rockets.

The RPG-40 is an easy to use weapon. With a little training one man in every squad could carry one of these rocket launchers, giving each squad significant anti-armor and anti-structure capability. The RPG-40 is carried by two soldiers: an operator and his assistant carrying extra rockets. Two rockets can be clamped together for easier transportation. It takes 10 seconds for the operator to prepare the RPG-40 for firing. Maximum rate of fire is up to 3 to 4 launches per minute. 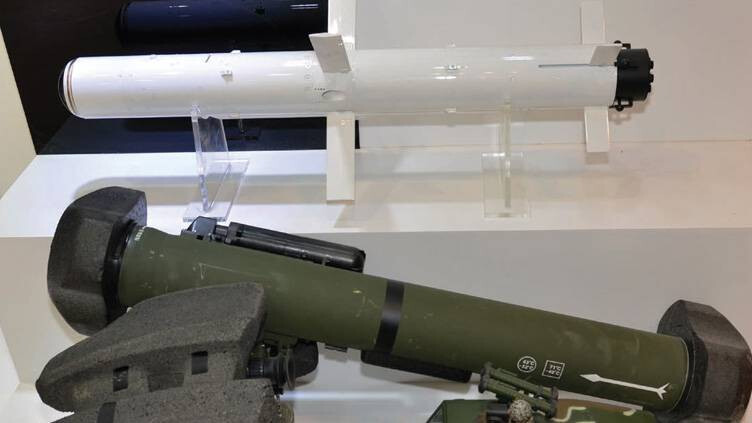 9M143 “Korone” is a Kliegmean man-portable third-generation anti-tank guided missile. It has a fire-and-forget capability using an infrared imaging seeker and has a tandem-warhead to defeat explosive reactive armor. The Korone has a top attack and direct attack modes.

The Korone’s most notable feature is a strong imaging infrared seeker providing its fire-and-forget capability, which is capable of identifying and firing upon targets from 3.5 kilometres away. It uses a smokeless propellant, which allows it to be fired from inside a building.

The Korone’s HEAT tandem warhead can penetrate 900 mm of RHA beyond defeating ERA, which makes it capable of penetrating most armour of modern main-battle tanks.

It is capable of being mounted on a vehicle, be it a Light Utility Vehicle, an APC/IFV, or a Helicopter.

Currently, it is only used by the Kliegmean Armed Forces.